The Defector: The Agency Begins

An American spy on a simple mission to intercept a Russian courier. What could go wrong?

John Smith is a veteran agent. He has skills and won’t apologize for his old-school methods. That’s why the CIA assigns him when they need results. And this time he’s at a posh ski resort in Switzerland looking for a Russian with a package.

Kira Semenov is desperate. No more spy games. She’s ready to check out any way she can after this assignment. Only quitting the FSB isn’t as simple as giving her two weeks’ notice. Not when she takes a lifetime of Russian secrets with her.

When John looks at Kira he sees more than a Russian with valuable intel. As his attraction grows, he realizes helping her defect is about more than politics. He’ll risk his career and his life to bring her to America and offer her the hope of a new future with him.

Can two fortysomething operatives break down the walls of distrust and help each other? Or will their instant attraction leave them vulnerable when the Russians try to exterminate their rogue asset?

The Defector is a fast-paced, smart, and exciting prequel to the NEW Miami Private Security Series featuring two characters in their forties. Expect thrilling escapes, tangled sheets, and a surprising future for a jaded CIA agent and Russian spy with nothing left to live for as they try to evade a team of FSB commandos in beautiful St. Moritz. 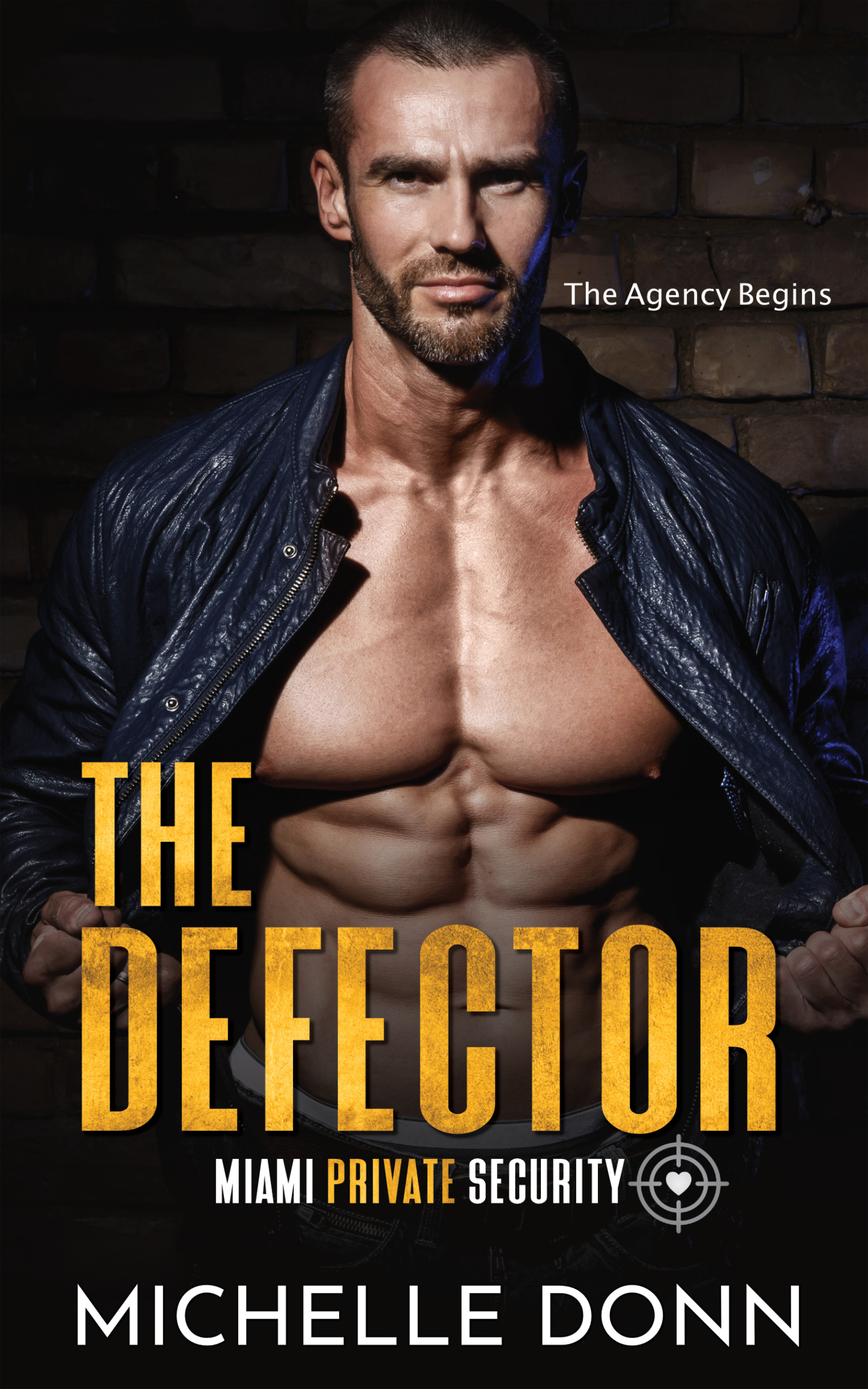 Be the first to get updates on new releases, exciting news, and special offers from me. 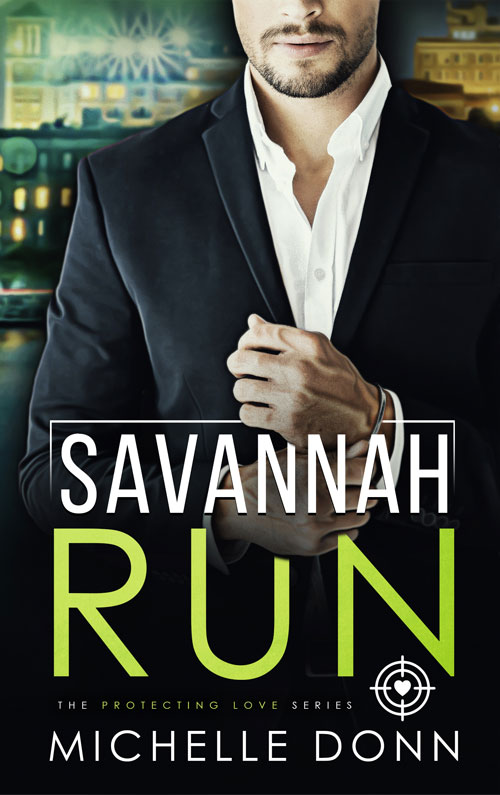 Leia Stone is in over her head and the help of a talented fixer with a dangerous past is her only chance of survival.

Her new accounting job has become a nightmare, her boss’s biggest clients are New York’s most brutal criminals. Her half-baked plan to turn evidence over to the FBI backfires. And Leia is being hunted for what she knows. Desperate she turns to a former customer with a plea for help.

Eric Robb is a man of many interesting talents.

He’s a professional fixer whose clients pay him handsomely to make their problems disappear. But now he’s got a problem of his own—protecting an idealistic beauty he’s never been able to get out of his head.

His past and her present collide when a lethal hitman with his own agenda joins the hunt. They need information and follow the trail of evidence to the southern city of Savannah. Attraction growing and danger stalking them they arrive in the city for a St. Patrick’s Day they’ll never forget.

Eric is only one man, and his skills may not be enough to keep Leia alive. Forcing the FBI to act might save her life but he could lose her forever once she becomes their star witness.

Savannah Run is the first book in The Protecting Love Series. Expect tangled sheets, daring rescues and a happy ever after ending. A protective hero and a bold heroine flee cross country from a hired killer.

A sexy air marshal not looking for love. A wealthy businesswoman whose deal lands her in danger. Neither expected a one-night stand to lead to a long-distance romance.

When real estate tycoon Katherine Ford’s life in DC implodes, she picks up and moves to Chicago. But the Windy City has its own perils—dirty politicians, corrupt business deals, and dangerous mobsters. Will she and Craig survive to find their happily ever after?

Craig March, veteran air marshal, stepped up and diverted a national tragedy. Little did he know the beautiful damsel in distress he saved was about to change his life. Their scorching one-night stand somehow goes from a fling to a long-distance relationship. And he has to figure out how to balance a career, an almost grown daughter, and a newfound love.

When Katherine’s ambitious business deal lands her on the wrong side of the Chicago Mob, she wants to fight back. But going it alone isn’t working. Can she accept that relying on Craig might be the only way to survive the threat? Or will her stubbornness cost her everything—the deal, her new relationship, and her life?

Chicago By Chance is book two in The Protecting Love series of standalone romantic suspense novels. It has steam, heart, danger, and humor. An ex-military over forty hero falls hard and fast for a thirtysomething millionaire businesswoman. Expect tangled sheets, perilous rescues, a hilarious personal assistant, and the awesomest Uber driver in the city of Chicago. 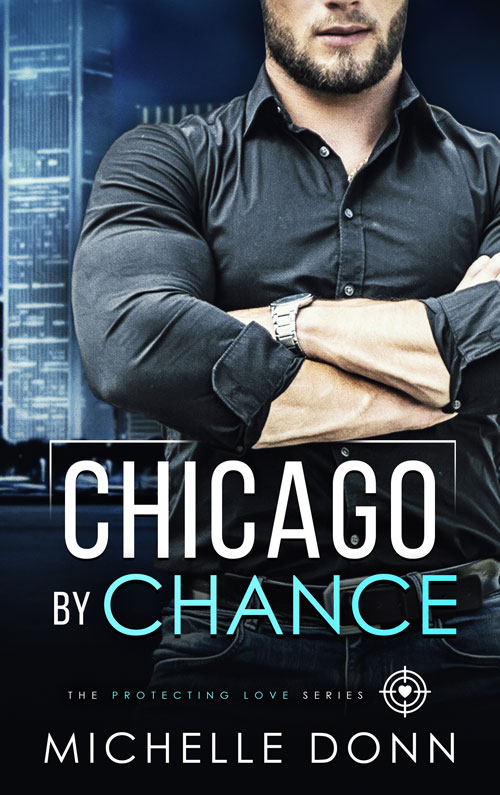 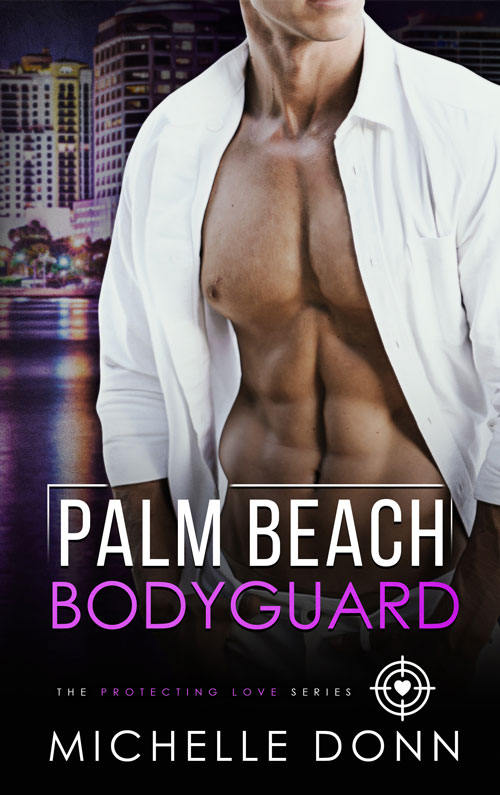 He’s the security expert her overprotective father hired. She’s the headstrong former prosecutor tempting him to break all his rules. Together they have chemistry hotter than the Florida sun.

It was the worst day of Ava Barton’s life. She’d been fired from the US Attorney’s office in Miami and learned there might be a contract on her life. The police and the FBI can’t protect her from “might,” so she begrudgingly takes refuge behind the walls of her parents’ oceanfront estate in Palm Beach.

Jackson King protects the rich and famous while they play in the Florida sunshine. When the powerful Barton family needs a bodyguard for their daughter, he steps up to take the job. But the platonic working relationship Jackson expects goes off the rails. And, against his better judgment, he wants Ava as more than a client.

When Ava’s life is at risk, Jackson’s need to claim her as his own threatens to boil over. Can he ignore his desires until the authorities catch the person behind the dangerous attacks? Or will her family send him packing?

Palm Beach Bodyguard can be enjoyed as a standalone but it is book three of the Protecting Love series.

An internet famous billionaire playboy teams up with a security expert who hates the spotlight to take down his obsessed stalker before anyone gets hurt.

Harrison Woodhouse has a problem–his seemingly innocent secret admirer has escalated to threats of violence against any woman seen on his arm. But he can’t afford to go dark on social media in the middle of his new product launch. If he does, he’ll lose his investors and his followers just when he needs them the most.

It’s time to bring in the big guns.

A former FBI Agent, Chevy Adams has made a name for herself as a private security expert specializing in stalkers—and experience has taught her to keep her own life private and offline. Until she’s hired to protect Harrison Woodhouse

When his stalker continues to escalate, she reluctantly agrees to take the risk and pose as his girlfriend, putting herself in the line of fire to take down whoever is behind the attacks.

Two people who live wildly different lives will have to fake their relationship long enough to save a company and catch a dangerous stalker. But when their chemistry proves to be very real, can Chevy reconcile her desire for anonymity with Harrison’s life in the very public fast lane? Or will any chance at love slip away once the job is done?

Perfect for fans of low angst love stories, this fake relationship romance between an almost forty-year-old billionaire and a thirtysomething female bodyguard ticks all the boxes: steam, danger, humor. Las Vegas Risk can be enjoyed as a standalone, no cliffhanger, but it is book four of The Protecting Love Series. 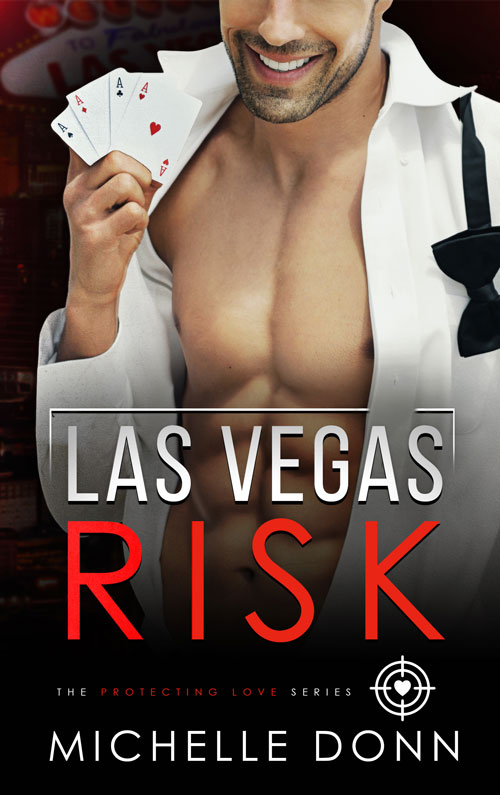 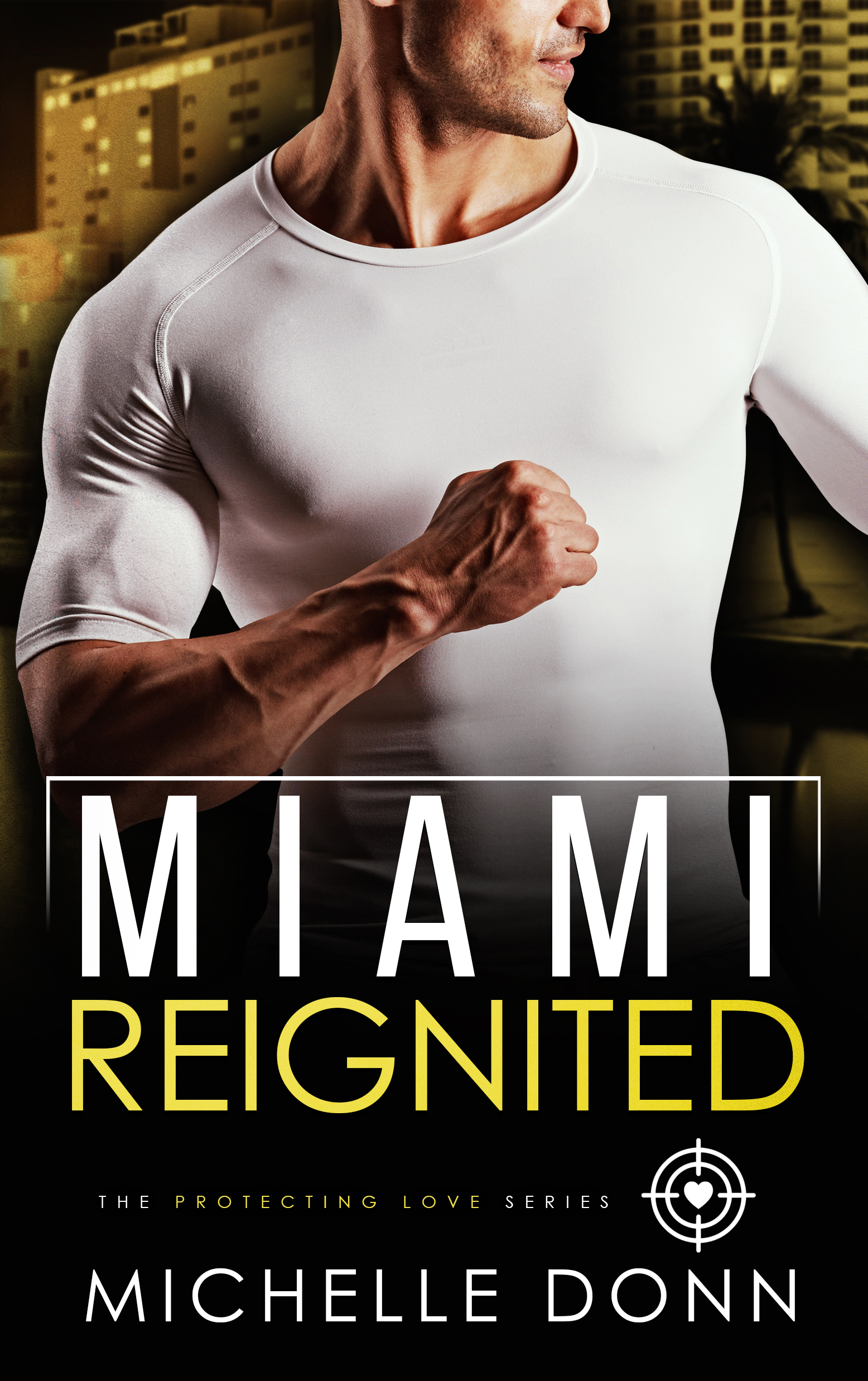 How fast can an old flame rekindle in the face of danger?

Lilly Rhodes never imagined her passion for art restoration could ruin her life. But somehow, it has.

Now she’s hiding out in a rental house in Miami with her three cats, using a fake identity, and letting paranoia guide her decisions. Out of options, all she can do is hunker down and pretend that being over forty and living like a crazy cat lady is normal.

Jared Heller didn’t need excitement. Twenty-five years at the CIA had given him plenty. Now the retired spy does investigations for a friend in private security, and his newest case is far from exciting. He’s stuck on never-ending surveillance duty sitting in a rental car, watching a house, waiting on his mark to do something…anything.

Sick of waiting, Jared gives his reclusive subject a little push out the door. But his push shoves her into a full tailspin and sends Jared down memory lane: his mark is his old college crush, Lilly Rhodes, and she needs his help.

Can Lilly leave paranoia behind and trust Jared with her secret? Or will her secret extinguish their old flame before they get the chance to rediscover just how hot it can burn?

A fling so hot it refuses to burn out.

After being shot on the job, Miami FBI Agent Rick Cabrera needs a temporary place to hole up and lick his wounds. He lands in Omaha, Nebraska with the goal of healing his body and flipping his late grandmother’s house. He never planned on the attraction between him and the single mother renting the basement apartment.

Maggie Stewart works two jobs, organizes the neighborhood social events, and doesn’t have time to date. But a summer fling with her sinfully gorgeous landlord might be just what the doctor ordered for them both.

When Maggie’s work on a high-profile event embroils her in danger, Rick starts to realize his feelings are more than casual. He will do whatever it takes to protect Maggie and her son from the fallout. But can he give up his life in Miami for a future with her?

Omaha Heat is a cute and steamy, fun romantic suspense with characters in their mid-thirties. This grumpy/sunshine romance has thrills, passion, and a happy ever after ending for a Florida FBI agent and a Midwestern single mom. Nebraska is about to experience a heat wave! 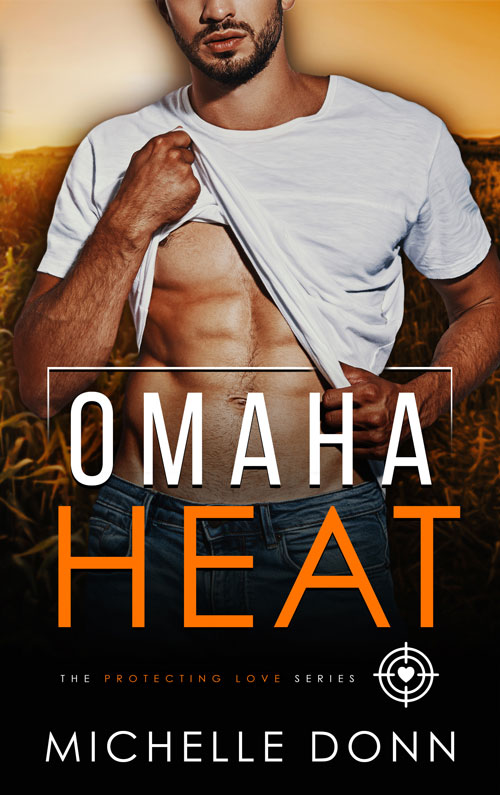 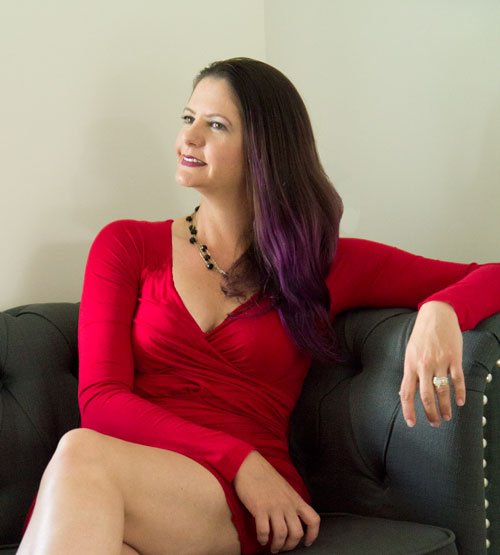 Michelle introduced herself to romance novels by stealing them off her mother’s bookshelf. She got caught red-handed when she destroyed a new book by dropping it in the bathtub before her mom could read it. From stolen paperbacks to an overloaded iPad, Michelle’s passion for reading grew into her debut contemporary romance novel: Savannah Run.

She has a bachelor’s degree from Southern Methodist University and has written a popular food blog for years. You can find all her recipe creations at cookbetterthan.com.

She lives in South Florida with her real-life prince charming, three dogs, three horses, a cat, and Daisy the donkey. Most evenings, you will find her floating in the pool, enjoying a cocktail, and working out the plot of her next book with her husband.

Read the book. Eat the chcoclate. Drink the Wine.